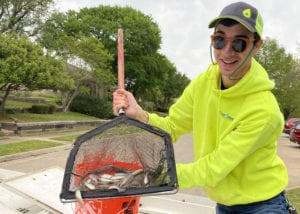 They say the best time to stock fish in your pond or lake is sooner rather than later! Hah!

In all seriousness, there are better times for stocking fish than others. It is crucial to stock fish in your pond or lake when it is not too hot and not too cold – essentially, the two best times to introduce fish is when they will have a better chance to survive and thrive; during the spring and fall.

If this is your first time getting fish into your waterbody, we have to talk about food webs and how ecosystems work. The basis of any food web or ecosystem is a producer, basically anything (typically) green that gets its energy from the sun and turns it into their food via photosynthesis. In aquatic ecosystems, this is phytoplankton – better known as algae. The next trophic level to feast upon the phytoplankton is primary consumers such as zooplankton (tiny crustacean animals), certain fish species, and fry (juvenile fish). Without this solid base of food (think the bottom of the pyramid) there would be no possibility of any fishery!

After the primary consumers, the next trophic level would be the secondary consumers that are larger fish such as bluegills, redear sunfish, and fathead minnows. These species need some time after stocking to establish their population density and create the forage base for the pond. That can take 1 to 2 years. The next trophic level would be tertiary consumers, known as predator species, such as bass, catfish, and walleye. It is important to remember that all other levels of the food web need to be established and functioning properly to support the sportfish that people love to catch!

Most pond owners and HOA managers want to stock fish so that people can catch the impressive-sized fish. However, more goes into stocking fish than just dumping in the large bass everyone wants on their hook!

We have outlined here the planned, methodological approach that will produce the desired results – it just takes time! It can take up to 3 years to have a solid fishery established. As they say, good things take time, and good things come to those who wait! In future blog posts, we will detail the environmental and economic benefits of specific fish – stay tuned!

Sonja recently earned her Master of Science in Lake Management and relocated to North Texas! Her passions include freshwater ecology and management, as well as science communication to a variety of audiences. She strives to continually create engaging, informational content to share her knowledge and the latest research findings in the limnology field. If you ever want to talk water, Sonja is available!

Your water quality testing results are only as good as[...]

It’s early summer in Texas and we’re getting calls about[...]

Have a water problem? Help is one click away